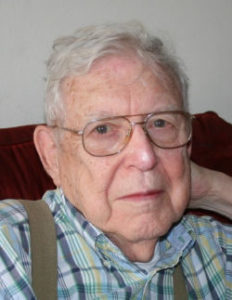 We were saddened to recently learn of the death of Moses M. “Mose” Coleman Jr. on May 8, 2019 at Vidalia, GA. Moses M. “Mose” Coleman Jr. was a genealogist and book author, among many other endeavors. He authored 8 cemetery books, including “Cemeteries of Emanuel County Georgia”. His last published book was “Granny Bess”, based upon letters saved by his grandmother Bess McCorkle.

Moses M. “Mose” Coleman Jr. was a 3rd great grandson of Solomon Yeomans, who served as a private in North Carolina during the Revolutionary War and who died in Emanuel County, GA.

Mr. Moses M. Coleman, Jr. age 92, died Wednesday, May 8, 2019, in the Community Hospice House in Vidalia, after an extended illness. He was the son of Moses M. Coleman Sr. and Alice McCorkle Coleman. He was preceded in death by his parents; son, Mose M. Coleman III; brother, Daniel B. Coleman; and grandson, Harry C. Greer. He was a 1944 graduate Lyons High School and enlisted in the Navy after first year at Georgia Tech. He was on the “Shakedown Cruise” of the U.S.S. Huntington. Mose graduated from Georgia Tech with a Bachelor’s degree in Electrical Engineering after he got out of the Navy. He married Eleanor Gardner, February 25, 1949. He owned and ran a radio and record shop in Vidalia for several years in the early 1950s.

He was an instructor at the Naval base in Albany, Georgia from 1956-1958; worked at Raytheon in Massachusetts from late 1958 to summer 1962; moved to Huntsville, Alabama and worked in the space program at Redstone Arsenal for Brown Engineering, and Sperry Rand. Specifically, he worked on Telemetry project for Saturn rockets. In 1968, Mose moved his family back home to take over the beverage portion of his father’s Coleman Paper Company business. He founded his company Coleman Sales, Inc. and was owner and president until 2000. Mose was one of the first private businesses in this area that used computers. He learned a programming language and wrote software that eventually handled all aspects of his distributorship. He was a very creative and innovative business man.

Photography was an early interest of his. He purchased his first camera when he was twelve years old and at present there are thousands of photos in his personal collection. He kept up with the latest technology in computers, cameras, and electronics. He was very skilled at using photo editing software and spent many hours fixing up and repairing old photos for many area people.

Genealogy was another love of his. Every year on his family vacation, he would always include stops at different courthouses to do family research. When genealogy software and then online research became available, Mose quickly became adept at using these tools, both for him and others who were researching their families. He was a member of the Sons of American Revolution, a charter member of the Sons of the Confederacy, Robert Toombs Chapter #932 and was a member of the Vidalia Rotary Club.

Starting early in the 1990s, he started surveying cemeteries in the surrounding counties, eventually publishing 8 cemetery books. He was presented awards by several chapters of the Daughters of the American Revolution in recognition of the importance and value of his cemetery books.

The last book he published was “Granny Bess”. This book was based on letters saved by his grandmother Bess McCorkle and took him nearly forty years to finish. He was an accomplished pianist and a talented artist. He was a very generous man and had many friends.

A graveside funeral service will be held Saturday, May 11th at 3:00 p.m. in the Lyons City Cemetery with Reverend Don Moye officiating.

The family will receive friends at the funeral home on Saturday afternoon from 12:30 until 2:30.

In lieu of flowers, memorial contributions may be made to the Southeastern Technical College Foundation, 3001 East First St., Vidalia, GA 30474.